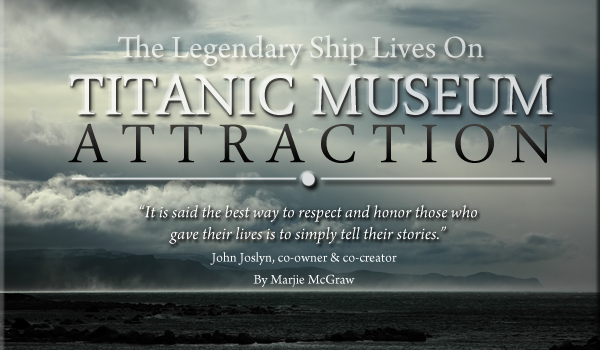 It has been almost a century since the RMS Titanic sank, and yet the world’s fascination with the ill-fated ship remains “unsinkable”, buoyed by the 1985 discovery of its decaying hull, and the 1997 Oscar-winning blockbuster film, Titanic, starring Leonardo DiCaprio and Kate Winslet.Which is why I couldn’t resist touring the World’s Largest Titanic Museum Attraction. Nor could the tens of thousands of others who’ve meandered through the fascinating facility in Pigeon Forge, Tennessee, located near Dollywood and the Great Smoky Mountain National Park, since it opened its doors this past Spring.

Even “Admiral” Regis Philbin showed up to host the grand opening ceremony and christening of the “vessel”, a half-scale permanent three-deck re-creation of the front half of the Titanic. The size was enough to draw me in, especially when I learned “The World’s Largest Museum Attraction” features full-size re-creations---built to actual Titanic blueprints---of select rooms, plus 20 galleries displaying nearly 400 authentic personal artifacts and their history. 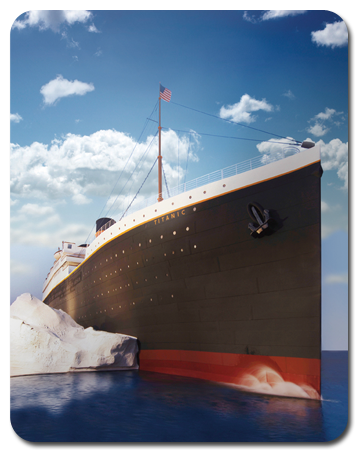 The museum’s focus is on the historical elements of the doomed ocean liner---the architecture, the building of the ship dubbed the “The Millionaire’s Special”, rare rescued relics, interactive displays, replicated rooms and especially the passengers---which means there’s only a slight nod to the movie. If nothing else (and there’s plenty else), the Titanic Museum Attraction pays attention to minute detail.

There are other Titanic exhibits around the world, but aside from its smaller twin sister in Branson, Missouri, this one is decidedly different. For one thing, you’re not just a curious tourist sauntering on a self-guided tour; you’re a “passenger”. Big difference. On entering the Titanic Museum Attraction, a costumed crewmember hands you a White Star Line boarding pass imprinted with the name of an actual passenger and his or her story. Assuming the identity of a real voyager adds to the intrigue because you don’t discover “your” fate until you reach the Memorial Room Gallery and scan the lists of the 712 survivors and those 1,496 passengers who were not so lucky. 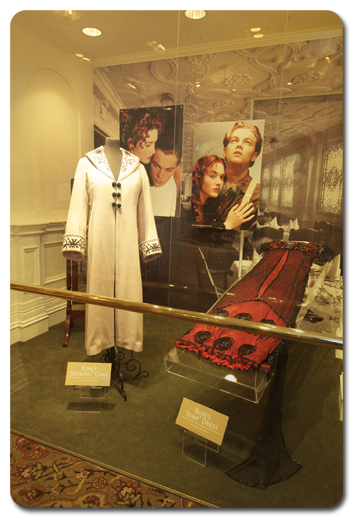 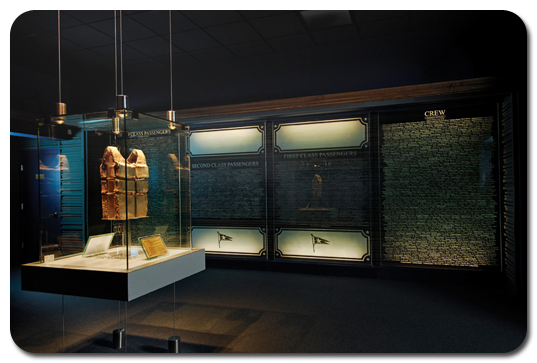 On my Titanic voyage, I was Juliette Larouche, the pregnant French wife of wealthy Haitian engineer Joseph Larouche, the only Black passenger on the ship. Seeking better employment and less discrimination, the couple and their two young daughters were moving to Haiti, where Joseph’s family was prominent and politically powerful. The Larouches traveled second class, although they enjoyed many of the perks of the first-class, including supping in the same dining room as the ultra-wealthy.

I boarded the 30,000 sq. ft. Titanic Museum Attraction through the jagged gash slashed by the iceberg and was cheerfully welcomed by the uniformed First Officer. While I waited for a mass of fellow passengers to surge forward, he enthusiastically related facts, figures, and interesting tidbits. The very first exhibit I came to was an interactive display of an open-sided model of the Titanic that gives a vertical visual of the ship’s layout. The next room revealed the building and launching of the so-called “Wonder Ship”.  Blueprints, tools, floor-to-ceiling photographic murals of the construction phases, and other artifacts reveal a behind-the-scenes view of the doomed state-of-the-art floating masterpiece. 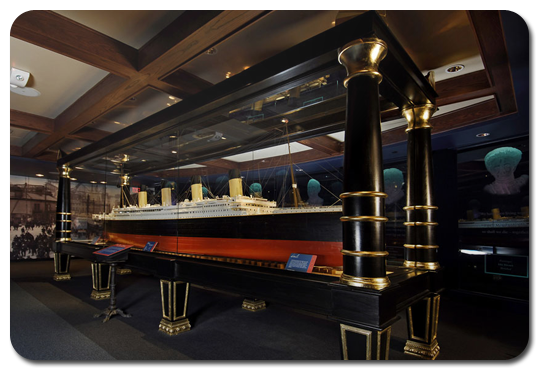 Every room and exhibit, every first-person story took me farther back in time; the Titanic and its passengers came alive as I walked along. I could hear the orchestra playing lively ragtime tunes, the ominous sound of rushing water, ship officers shouting orders and dogs barking in the ship’s kennel. I viewed perfectly preserved Titanic signature china and silver serving pieces, the First Class E deck master key that First Class bedroom steward Edmond Stone used to open stateroom doors so he could alert passengers like actress Dorothy Gibson that the ship was sinking. Along the way, costumed crewmembers, always in character, added realism and insight.

The First Class Parlor Suite, the exact replica of the one used by Isidor and Ida Straus, is dedicated to the devoted couple, co-owners of Macy’s Department Stores. Rather than be separated from her husband of forty-one years, Mrs. Straus declined two lifeboat invitations and reportedly told her spouse, “We have lived together for many years. Where you are, Papa, I shall be.” After making sure their maid was seated in Lifeboat No. 8, Mr. & Mrs. Straus strolled to a pair of matching teak deck chairs and sat together awaiting their fate. 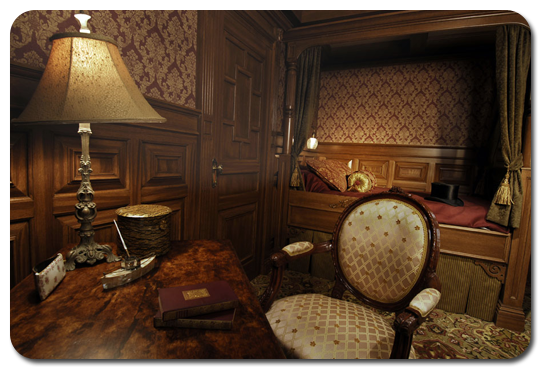 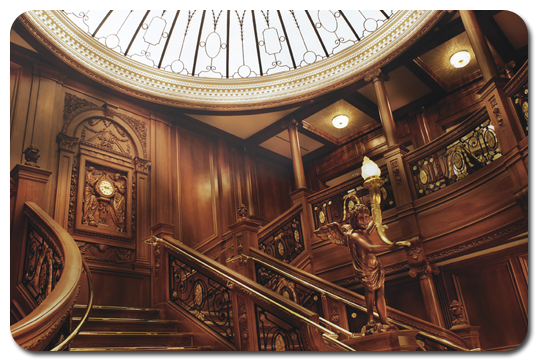 The three other uber opulent First Class Parlor Suites were booked by Bruce Ismay, the White Star Liner’s managing director and son of its founder. In today’s dollars, these lavish quarters would set wealthy cruisers back more than $125,000. Private promenade decks and baths with marble lavatories didn’t come cheap. For multi-millionaires, however, the price was just a drop in the bucket, which unfortunately later became a drop in the sea.

The Titanic was the first ocean liner in maritime history to offer Third Class accommodations, rather than steerage; there was a vast difference between the two. Third Class cabins were cramped but came with real spring mattresses, blankets, sheets, pillows, a washbasin between the bunk beds and electric lights, and heat. Ship stewards brought in freshwater daily and emptied the chamber pots, something unheard of in steerage. Even better, all rooms were located above the waterline. Unlike other ships where the steerage class had to provide their own food, the Titanic’s Third Class passengers were served three hot meals a day in a dining room set with linen tablecloths, china, and glassware.

Wandering through the displays of small personal items and their former owners was interesting and poignant. John Gill, for example, was 24 years old and had married his English sweetheart on Valentine’s Day, two months to the day when he went down with the Titanic. Losing the love of her life so traumatized the young newlywed that she remained mute for two decades. Like many other Titanic widows, Sarah never remarried. 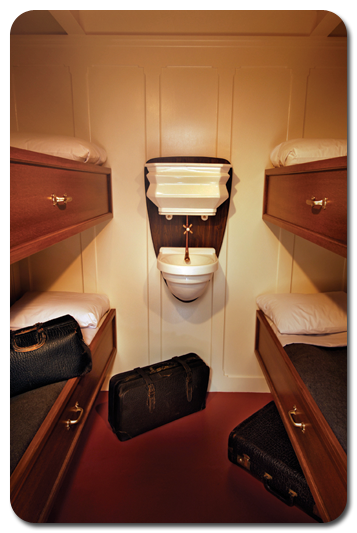 The museum’s interactive opportunities were an integral part of my Titanic experience; these made the history come alive. I shoveled coal into the massive furnace, tried---and miserably failed---to steer the Titanic away from the looming iceberg, surveyed the sea from behind the “Telemotor Wheel” on the bridge while the Captain barked orders, and in the Marconi Wireless Room, I perused the authentic 1912 telegraph equipment and tapped out SOS in Morse Code.

I had another “I am there” moment at the Titanic Museum Attraction’s next interactive display: the frigid 31º Promenade Deck. The stars twinkling over a tranquil, ink-black Atlantic belied the chaos that erupted immediately after I opened the door and stepped “outside”. The ringing of the brass warning bell, the Lookout’s frantic scream, “Iceberg right ahead!” and one minute later, the jolt of razor-sharp Arctic ice mortally wounding the Titanic’s watertight compartments that, in the end, weren’t. 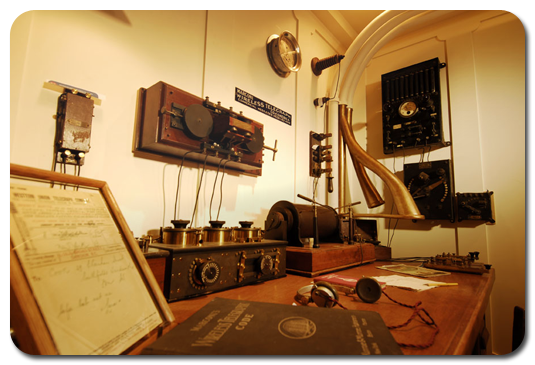 I then came to a full-size lifeboat designed to seat 65.  This same-size pine replica of those on the Titanic was marked Lifeboat No. 4, the vessel in which Madeleine Astor, the pregnant 18 year old bride of multi-millionaire John Jacob Astor IV; First Class traveler Lucille Carter; Titanic Trimmer Thomas Dillon; five-year-old Third Class passenger Lillian Asplundt and 26 other hapless souls spent between four to six hours at sea before being rescued by the Cunard Line’s RMS Carpathia. The same cork-filled canvas life jacket Mrs. Astor wore, one of only three Titanic life jackets in the world, is housed in a glass exhibit case. I stepped in the sturdy vessel and then moved seat-to-seat, punching the interactive display buttons so I could hear No. 4 survivors’ eyewitness accounts. 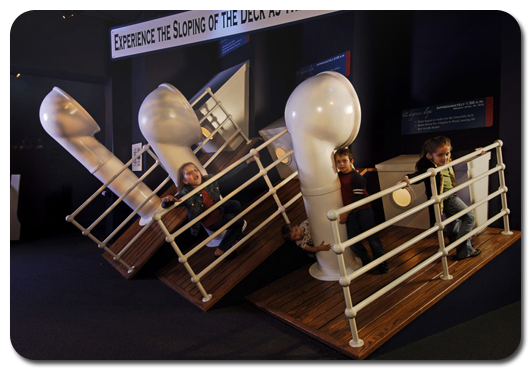 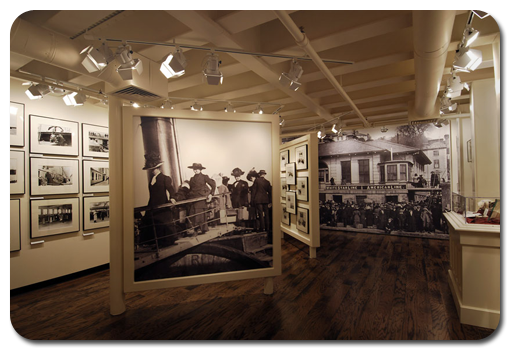 It took just two hours and forty minutes for the Atlantic to swallow the Titanic. In the beginning, some optimistic passengers bought into the White Line’s hype and believed they stood a much better chance of survival if they remained on the liner---in fact, when women and children were first loaded into the lifeboats, the crew insisted it was merely a “precautionary” measure and assured them they’d probably be back by breakfast. It wasn’t until 1:50 AM that those trapped aboard knew the ship was in trouble and so were they.

My next tour stop was the Movie Room, where I watched compelling scenes capturing the Titanic’s construction, the Carpathia steaming into New York with its load of traumatized Titanic survivors, and the retrieval ships setting off on their morbid recovery mission. Just when I was getting to know the personalities and histories of the passengers, the dimly lit Discovery Deck jerked me back to 2010. There I was, 2.5 miles under the North Atlantic Ocean, buzzing around the Titanic’s rusting, crustacean-coated remains. It was exciting to be part of the dive crew surveying it---the wide-screen oceanic panorama made me feel like I was actually inside the research vesseI---but at the same time, it was sad; this dissolving 1912 monument to man’s ingenuity, technology and overconfidence is also the monument marking the graves of nearly 1,200 trusting passengers.

It took me more than two hours to complete my self-guided tour; spending any less time would be a sacrilege.  When I reluctantly “disembarked” and set foot on dry land, ghosts of the RMS Titanic tagged along. The Titanic Museum Attraction isn’t something you see and forget. Even if you enter thinking you know all about the ill-fated “practically unsinkable” ocean liner, trust me; you don’t. Once you’ve “met” the stoic souls who chose certain death so someone else could live, once you’ve experienced the unforgettable sights and sounds of the sinking, and once you’ve viewed the tragedy through the eyes of those who survived, the memories of the Titanic and its passengers will linger long after you’ve left the ship.